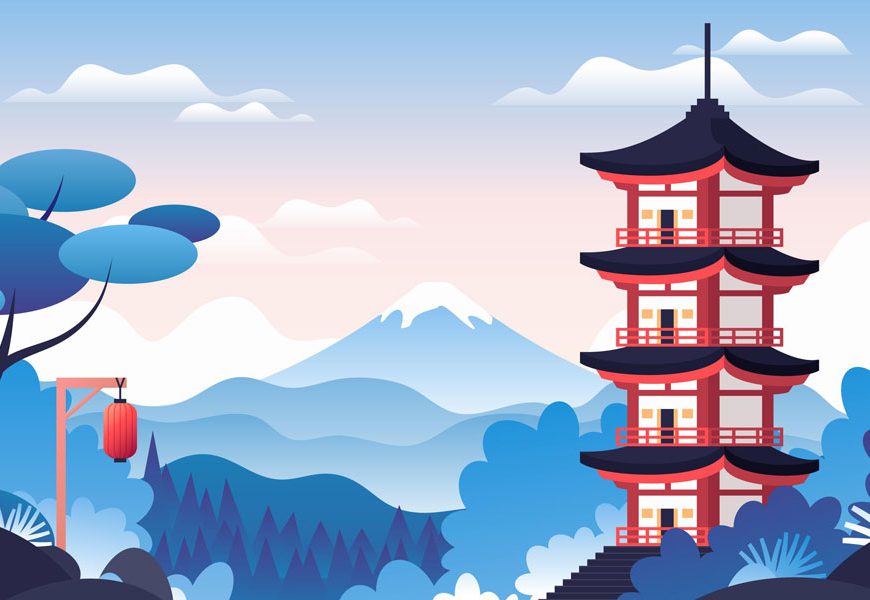 The Origin of Japanese Architecture

During the 1st century B.C.E., Japanese houses looked so much like any other house across the world, which consisted of wood with earthen floors and thatched roofs. Some of Japan’s first shrines, built before the 6th century, were similar to the ancient storehouses or normal houses. In the 7th century, Japanese architecture developed its unique style, having been influenced by other Asian nations. Only this time, wood rose as the most preferred building material for Japanese architecture. The lack of stones available in the country is because of volcanic activity, and wood’s proven reluctance to the earthquake.

Also read:  Japanese stores to help you survive in Japan

During Asuka and Nara, Japan embraced architectural strategies from China and the Korean Peninsula. The establishment of temples also started after the introduction of Buddhism to Japan in 538. As per the records, temple carpenters and makers of Buddhist images and artifacts originated from Paekche in 577. The temples named Hoko-ji Temple, Asuka-dera Temple, and Takaichi-gun are some temples built by the Asuka Clan from 588 to 609. Shitenno-Ji Temple, which Prince Shotoku founded, is one of the oldest Japanese Buddhist temples. The oldest temples in their original state are Saiin Garan (Western Precinct Complex concluding Naka-mon Gate, Kon-do Hall, Five-Story Pagoda, Dai-Ko-do Hall, and more) Horyu-Ji Temple, including Three-Story Pagoda of Hokki-ji Temple, which is located in Ikaruga-Cho Nara Prefecture, and Ikaruga-cho. Nonetheless, the influence of Chinese architectural style grew during the Sui and Tong Dynasties when Japanese mediators were sent to China.

During the Heian period, the architecture of Japan possessed multiple features, where rooms created a calm and composed atmosphere with lower ceilings and thinner pillars. After that, a Unique Japanese style of architecture was formed, called Wayo Kenchikul.

2. Japanese Architecture of The Medieval Period

The trading between China and Japan increased during the Kamakura period, where Chinese architectural styles were reintroduced to Japan. It was first brought to Japan and was utilized to restore Todai-ji Temple. It is an idol of Birushana Buddha, which was built and destroyed by fire during the Jisho-Juei War at the end of the Heian period. Chogen SHUNJOBO devoted the newly made Great Buddha image in 1185 after numerous obstacles during its construction. However, the Great Buddha Hall was reconstructed in 1195, and a grand memorial service was organized in 1203.

Also read: How To Choose The Right Japanese School For You In Japan

The Momoyama period refers to 1573 when the Muromachi shogunate fell, and the Toyotami family was thrown out in 1615. During this time, castle architecture was formed. Many castle towers were constructed as a symbol of power. Numerous beautiful paintings were drawn on partitions to show the Era of unification. The Tea ceremonies that started during the Muromachi period were formed by SEN no Rikyu, and a new architectural style for a tea room space was born.

During the Edo period, when numerous popular cultures flourished, a clear deposition towards secularism was seen in the field of architecture. Sukiya-zukuri style is one of the preeminent examples of this. Many residential places, theaters, private houses, and temples were built.

The trading houses, buildings, residents, and churches for the foreign nationals were constructed in the foreign settlement formed in the Tokugawa shogunate’s final days. The Glover Mansion, located at the top point in Nagasaki, was constructed by Japanese people under the command of Glover. However, some structures were built by foreign engineers in the country. Encouraged by the new Japanese architecture in the foreign settlements, the builders of Japan started constructing Western-style buildings and houses.

During the Meiji period, the Japanese government made numerous attempts to attain Western architectural technologies to develop the country. Josiah CONDER and Thomas WALTERS are two famous foreign specialists invited to Japan for government service. Josiah Conder did everything and put his effort into training the Japanese architects at the Imperial College of Engineering. It is one of the reasons why he is called the “father of Japanese architectural studies.”

To construct the city, build several government offices, and realize the need for specialists in the architectural field, Japan sought assistance from the German government, an advanced European Nation. Hermann ENDE and Wilhelm BACKMANN are two famous architects selected for the project and sent to Japan. Based on their suggestion, some of the delegates were sent to Germany to study and attain the needed knowledge and skills required to build an advanced state.

Twenty young Japanese people were sent to Germany to specialize in numerous fields of architecture. Many delegates who returned to Japan from Germany played a key role in developing the country. Out of those 20 Japanese people, 17 of them specialized in carpentry, stonemasonry, brick-laying, artificial stonemasonry, painting, plastering, and roofing. Kotaro SAKURAI is one of the prominent names to deserve special recognition. He was the first Japanese to attain a license as an accredited British architect in 1892 after studying at London University.

Architecture is one of the prominent technologies of this modern world, which is learned from western countries. The major natural disasters such as the Nobi Earthquake and the Great Kanto Earthquake led to advanced technologies to prevent the damage. Besides this, the first Ja[panese architectural design movement began with a group of graduates from the department of Tokyo Imperial University in 1920 during the mid-Taisho Era.

During the Second World War, there were several blows off, and the Japanese architectural movement came up with several development opportunities after the war. However, earthquakes were one of the major problems in Japan, but as the technologies enhanced, there was a rise in more buildings. Japan started promoting popular architects like Fumihiko, Kenzo TANGE, Tadao ANDO, and MAKI. It helped in enhancing the modern architecture in Japan.

For the time being, apart from a few architects in the Taisho and early Showa periods, scenic beauty in cities were lost during wartime and after the war. Many beautiful buildings and locations were destroyed during the war. It raised the concern of Japanese cities becoming ugly, and numerous measures, such as the allotment of preservation districts for numerous groups of historical locations.

Here are some of the common archaeological elements of Japanese buildings:

Woods are one of the most integrated parts of traditional Japanese mansions. Due to natural disasters like earthquakes, humidity, typhoons, wood became one of the most preferred materials over stones and other items. One significant reason is that it offers proper ventilation to go through the problem of climate change. It is also durable from natural disasters, and this is why people chose woods to build their traditional Japanese house. It has attained enormous respect from the Japanese people. However, the knot woods in Japanese buildings are generally considered as decoration. It is not only appreciated for its durability but also for its pleasant scents.

Shoji and Fusuma, also known as sliding doors, are always concluded in the traditional Japanese house design, consisting of wooden frames with translucent paper and fusuma paper to control the light inside the house. Most houses in Japan are generally solid white, and in shrines or temples, they are generally painted. Nonetheless, they share many similarities, but their roles are highly different. They are also used as interior doors and partitions to divide one room into two sections. The best part is that they always allow light and shadows to flicker inside the house, offering a cozy feel to the residents.

Tatami mats are used for flooring, and it is one of the essential elements of Japanese architecture. These mats are traditionally rice straw covered with woven soft rush straw. However, Tatami does have compressed wood clipboards and polystyrene foam cores. The size of the mats is standardized; however, size can also vary depending on the region. Over the years, it has been popularized, and you can find it in almost every Japanese house since it is an essential component of the Japan architect.

The long and curvy Japanese roofs are a prominent part of Japanese architecture, available in most buildings. They are not only attractive but also play a key role in buildings. Normally, there are four types of roofs in Japan which are kirizuma (gabled roof), hogyo (square pyramidal roof), yosemune (hipped roof), and irimoya (hip-and-gable roof). These are some of the most popular Japanese roof styles that you will find in Japan.

Genkan is the traditional gateway entry area that you will find at the exterior traditional Japanese house. It serves as the area where shoes are put before going inside the center part of the house. It is constructed lower than the floor in the rest of the house to keep dirt and mud out of the room. You can find it in almost every Japanese house, school, company, hotel, and other commercial building.

Today, Japan has emerged as one of the most economical and technologically advanced countries in the world. Its development throughout the years and longstanding cultural traditions is commendable, which plays a prominent role in the architecture culture. Japanese architecture is shaped by varieties of concepts and beliefs that are influenced from the western culture.

Some Top Examples of Japanese Architecture

Now that you know the important components of Japanese traditional architecture, you would not have to worry much after moving there. Instead, Japanese architecture has become one of the crucial points of wisdom and inspiration in the rest of the world. The examples are as follow:

Nowadays, architects appreciate the Japanese tradition of experimentation, following age-old principles of tranquil reflection in the simplest manner. In simple words, the Japanese architecture shows the delicate and striking balance between the modern and natural materials. As the time passed, many other countries have adapted the architectural form of Japan!

We hope this blog helps you to understand the history and modern day architecture of Japan. Until next time, sayonara for now! 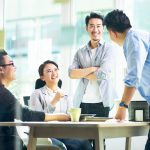 Previous Story
How To Start A Conversation With Japanese People
→ 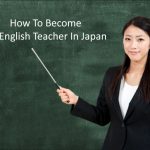 Next Story
How To Become An English Teacher In Japan